‘Education, Diversity and Social Cohesion’ at the University College, London

The conference centred on three key questions, namely: what education can do to curb these worrying trends; whether education can foster tolerance; and where the emphasis should lie – on civic education for ethnic groups (as has been the focus in the UK) - or on building intercultural competence in the native population?

In opening the conference, the Director of ‘Llakes’, Dr. Andy Green, stated that, at such a time of global change, especially in Europe with the on-going immigration crisis and impending Brexit, the UK was an apt setting for international sociologists, educators, researchers and policy makers to consider the implications of the crisis and means to promote greater social cohesion. In his opening address, his colleague (and one of the conference organisers) Dr. Germ Janmaat stressed that the increase in populist, nationalist discourse was coinciding with a decrease in tolerance of ‘difference’, across age spectrums and backgrounds. This new, exclusionary trend tends to focus on ‘the national interest’ which posits ‘foreigners’ as less deserving of the same rights or opportunities as ‘natives’. This, he stated, could lead to immigrants feeling excluded and therefore voting along exclusively ethnic lines, as happened in 2017 in The Netherlands where ethnic immigrants voted in the large part for far right candidate election candidate Geert Wilders.

The first keynote speaker of the conference was Associate Professor Per Mourritsen, of Aarhus University, Denmark (who also holds the Willy Brandt Chair in Malmö University, Sweden) with his speech entitled ‘Education and migrant integration in Denmark and Sweden’. He pointed out that the vastly different approaches to migrant groups and migratory issues in Denmark and Sweden were directly relatable to the hugely different outcomes which migrants experience in these countries i.e. Denmark takes a strict (and some would say, repressive) approach to the 8.5% of its population who are foreign-born, resulting in only 20% of those migrants who are eligible to apply for naturalized status doing so. Sweden takes a much more lenient approach to the foreign-born 10% of its population, leading to very high naturalization rates. Not surprisingly, Professor Mourritsen stated, in a recent ISSP cross-national poll taken in both countries asking migrants how close to the majority population they felt, numbers of migrants in Denmark who reported felt like they ‘belonged’ were falling steeply, while this pattern was inverted in Sweden. He also stated that in Denmark, citizenship is primarily oriented towards language integration, involving citizenship duties and earned rights, whereas Sweden holds a more cosmopolitan approach to citizenship called ‘’medborgarskap’, which roughly translates as citizenship and inclusion for all through equality of rights. The keynote speaker concluded that while immigrants show a stronger academic performance in Sweden than in Denmark, in both countries, first generation immigrants show poor academic performance (with second generation migrants doing better). 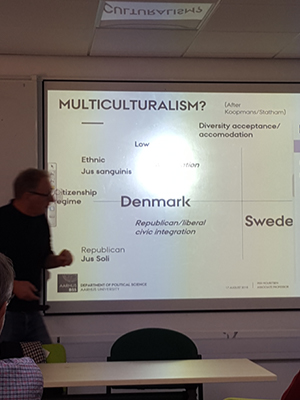 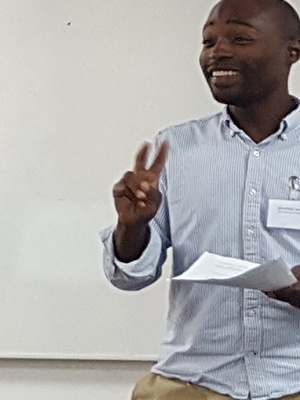 Day Two opened with the second keynote speaker, Senior Policy Analyst with the OECD, Paris, Dr. Francesca Borgonovi whose presentation, ‘Immigrant-native gaps in the social outcomes of education’ investigated the role of education systems in Europe in managing the challenges of integration. Dr. Borgonovi began by examining the macro-context of the conference theme: firstly, that recent global demographic shifts (since 2015) have seen new linguistic and cultural diversity in asylum seekers with an especially large shift in the numbers of small children (under 5) being displaced; secondly, that these unprecedented movements of people are resulting in growing social inequality; and thirdly, that these phenomena are occurring in the context of the global economic crisis of 2008 onwards with its concomitant pressure on society, culture and systems.

Dr. Borgonovi stated that official OECD policy sees education systems as essential in meeting these challenges by lifting the educational attainment and resulting academic and socio-emotional well-being of immigrant students. She stated that the OECD takes a longitudinal approach to this issue and examines resilience from a ‘whole child’ perspective, which encompasses academic standards attained (as measured by the PISA benchmark tests); social engagement, as measured by reported feelings of ‘belonging’ at school; emotional security, as measured by reported satisfaction with life and low school-related anxiety; and finally, motivational approaches, as measured by reported high motivation to achieve in life. Key contributory factors include the role of the family and parents in schools; school choice; and family socio-economic status. She stated that in many countries, immigrant students are more likely to be socially and economically disadvantaged, the victims of frequent bullying and to feel unfairly treated by teachers. In addition, she referred to the OECD Teaching and Learning International Study (TALIS, 2013) in which European teachers reported the need for improved professional development to better deal with the demands inherent in working with diverse, multicultural groups. She also presented data from successive iterations of the European Social Survey (ESS 2012, 2014, 2016) which broadly speaking, reports that better educated populations are less likely to oppose migration which could posit education as a global marker of distinction, not just in taste but also in morals.

Throughout the second day of the conference, sessions included ‘Schools, pedagogy, identity and sense of belonging’; ‘Education, civic competences and tolerance’; ‘Teachers’ perceptions and beliefs about diversity and inclusion’; and finally, ‘Teacher professional development, diversity and emotional skills’, with presenters from Roma Tre University; Masaryk University, Brno; Erasmus University, Rotterdam; University of South Wales; Ghent University; University of Amsterdam; the Malta College of Arts, Science and Technology; Cape Peninsula University of Technology, South Africa; Cardiff University and Dundalk Insitute of Technology. In the last session, Dr. Brereton presented the findings from the recent excellent engagement of DkIT staff with the National Forum for the Enhancement of Teaching and Learning in Higher Education professional development project, in a paper entitled ‘Both Sides Now: Implementing mentoring and PD best practice in a diverse HE environment’.

After such a stimulating and successful 2-day event, hopes are high for the up-coming 14th ESA Conference 2019, entitled ‘Europe and Beyond: Boundaries, Barriers and Belonging’ to be held 20th-23rd August in Manchester, UK.