Bringing together undergraduate and postgraduate students, the DkIT Ceol Oirghialla Traditional Music Ensemble draws inspiration from a variety of Irish traditional music groups, exploring possibilities of arrangement and inspiration with respect for both tradition and possibility. The Traditional Ensemble provides numerous opportunities for students to hone their stagecraft and performance skills in diverse contexts. The Traditional Music Ensemble brings Irish traditional music to the heart of college life and has toured internationally with performances in North and South America, Norway and Scotland in recent years.

History of the Ensemble

In 2018, the March concert Éirí na Gréine was again the highlight of DkIT’s Seachtain na Gaeilge and marked the launch of the Institute’s Irish Language Scheme by DkIT President, Dr Michael Mulvey. The concert featured a number of solo performers who are engaged in study at both undergraduate and postgraduate levels. During the summer, members of the ensemble returned to Scotland for performances and workshops at Speyfest. 2018 was also significant for Co. Louth as Drogheda hosted Fleadh Cheoil na hÉireann.

Past and present members of the DkIT Traditional Music Ensemble performed to welcome President of Ireland, Michael D. Higgins to officially open the event and DkIT staff, students and graduates performed prominently throughout the week. In November, the Ensemble teamed up with the Oriel Traditional Orchestra for Oirghialla Oscailte, a concert held in An Táin Arts Centre, Dundalk. The partnership, which will see the sharing of research and commissioning of new works through the Creative Arts Research Centre at DkIT, is supported by the Department of Culture, Heritage and the Gaeltacht, Creative Ireland and Louth County Council.

In the Spring we presented a concert inspired by the music of Brian O'Kane. It is forty years since the Dundalk band, The Siamsa Céilí Band, won the first of their three-in-a-row All-Ireland Senior Titles. Brian was not only part of that band but also composed some of the music and the ensemble perform some of that music with Brian and members of his family on 15 March 2017. The winter traditional music concert at Dundalk Institute of Technology features music celebrating the traditions in the surrounding region, taking in music and song from counties Louth, Armagh, Down, Monaghan and Cavan. As we travel through the region, we also travel through time, merging the old and new in Irish traditional music and song. 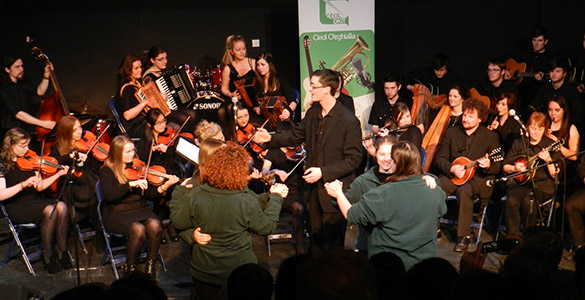 2016 was a wonderful year for the Traditional Music Ensemble with another successful TradWeek and our main concert, Adventures in Scotland, which took place on 16 November 2016. Having travelled to Scotland during the summer, we were delighted to bring back some of the music we encountered along the way and also recognise the close musical connections that exist between the two nations.

Motivated by the centenary year, our Spring concert, Éirí Arís, focused on the music of rebellion and, in particular, the 1916 Rising, and took place on 10 March 2016 as part of the Institute's commemorations and Seachtain na Gaeilge. We also performed as part of the 2016 Brigid of Faughart festival and the summer saw us further develop our international profile later in the year as the group were once again selected to perform during the International Society for Music Education Conference in Glasgow in July. We followed that up with a trip to Speyfest in Fochabers where we were also involved in the making of a new documentary supported by the DkIT Research Office. A number of our members took part in the Michigan Irish Music Initiative in Limerick and have been very active in the local music scene, providing entertainment for a number of notable events in Dundalk.

Our major concert performance for the first semester of the 2015/2016 Academic Year was entitled Cois Farraige. Taking inspiration from the great repertoire named for and inspired by the sea, the Ensemble performed to a full house in the Mac Anna Theatre on Thursday 26 November as part of DkIT Tradweek 2015. Noted fiddle player Antoin MacGabhann, who recently released a solo album, called in for an inspirational masterclass, while students engaged in sessions on campus and in various venues in Dundalk.

The 2013/2014 was a very busy year for the DkIT Ceol Oirghialla Traditional Ensemble. The second DkIT Tradweek took place from 18-23 November 2013 and celebrated the music of the harp and its place in the music of the Oriel region with the gala concert Ceolta Cruit the highlight of the week. After Christmas, we took part in the Brigid of Faughart celebrations with a performance in the Old Gaol CCÉ Regional Centre, celebrating the connection of Brigid with the local area. In the second semester we celebrated our links with Molloy College, New York and Baker University, Kansas, with a series of concerts, Ó Chladach go Cladach, featuring music, song and dance from American sources. We are also delighted to be commemorating the millenium of the Battle of Clontarf with a special concert in the Patrick Kavanagh Centre, Inniskeen, Co Monaghan on 8 April 2014, along the route the great king's funeral procession would have taken in 1014.

For Ceolta Cruit, we welcomed guests and artists including Donal Lunny, Ann Heymann, Lisa Butler and Daoirí Farrell amongst others as the Traditional Ensemble joined in the ten year celebrations of music at DkIT.

Other events of the week included a symposium on harp performance practice, as well as a number of sessions held in a variety of venues in Dundalk. Students from Ceol Oirghialla Section of Music also participated in workshops in local schools and in collaboration with the Comhaltas Regional Centre at the Old Gaol.

In March we welcomed performing groups from not one but two visiting American performing groups to Dundalk last week. Staff and students from Molloy College, New York, and Baker University, Kansas, joined with staff and students from the Ceol Oirghialla Section of Music at DkIT for two special concerts entitled Ó Chladach go Cladach, From Shore to Shore.

The Ceol Oirghialla Traditional Ensemble marked the close musical connections between Ireland and America, presenting repertoire from some of the principle collections of Irish traditional music published in America including Ryan's Mammoth Collection (1855) and the work of Captain Francis O'Neill, published in Chicago at the start of the twentieth century. The presence of the 'Cosgrove' fiddle once played by Michael Coleman and currently on loan to the Section of Music, DkIT, further added to the occasion and final year student, Laura Kenny, performed a number of tunes recorded by Coleman himself. The Ensemble also marked the millennium of the Battle of Clontarf, following which Brian Ború's funeral entourage travelled through Louth to Armagh. Indeed the students will present a special commemorative concert in Inniskeen, Co Monaghan on 8 April 2014 as part of the ongoing national commemorations.

The 2013/2014 academic year marks the tenth anniversary of music at DkIT and in April and May of this year, students from the Ceol Oirghialla Traditional Music Ensemble will undertake return visits to New York and Kansas. As well as performing, students will have opportunities to attend classes, meet with American students, and lead workshops on Irish traditional music. Led by Dr Adele Commins, Head of Music, and Dr Daithí Kearney, Director of the Ceol Oirghialla Traditional Music Ensemble, the students will act as ambassadors for DkIT and will help build on the links already established and encourage further collaborations between the institutions.

In America, the group will act as cultural ambassadors for Louth and the northeast region of Oriel. Music has been carefully selected to represent the rich cultural heritage of this ancient kingdom and will include music from harper composer Turlough O’Carolan written for Lord Plunkett of Tallanstown, Co. Louth, poet Peadar Ó Doirnín from the Louth/Armagh border and the manuscripts of Patrick McGahon / Pádraig Mac Gatháin of Dungooley, Co. Louth. As well as our partner institutions, we will engage with various community and business groups to promote awareness of Dundalk and the surrounding region as a vibrant and positive place to live, study and do business.

The 2012/2013 academic year was a very exciting year for the Ceol Oirghialla Traditional Ensemble with the inaugural DkIT TradWeek and tributes to fiddle players Michael Coleman, John Joe Gardiner and Josephine Keegan. The Ensemble was also been invited to perform at Birr Castle, Stormont Assembly Buildings and at the renaming of the Boyne Bridge in honour of former President Mary McAleese.

The inaugural ‘Trad Week’ at Dundalk Institute of Technology was held in November 2012. As well as a showcase concert, Imirce an Cheoil, other events during the week included visits by our students to schools in Drogheda to present a series of workshops on Irish traditional music as part of our ongoing community outreach programme. Renowned fiddle player John Carty facilitated a masterclass on Irish traditional music with a performance of music from the North Connacht tradition. In association with The International Council for Traditional Music we hosted the first ‘Notes on Notes’ project, a series of instrumental workshops with Dr Mel Mercier (UCC) and Dr Niall Keegan (UL).

Ceol Oirghialla is honoured to have Michael Coleman’s ‘Cosgrove Fiddle’, on which he recorded the famous Tarbolton set, on loan this year, and this historic instrument featured prominently in Imirce an Cheoil. The concert focused on the music of two eminent Sligo-born fiddle players, Michael Coleman and John Joe Gardiner. Coleman (1891–1945) is one of the most revered fiddle players in Irish music circles who spent most of his life in New York where he recorded some of the most influential records of Irish traditional music. Gardiner (1893–1979) was a contemporary of Coleman’s who migrated to Dundalk and greatly influenced the local music scene both as teacher and performer. At Ceol Oirghialla we are proud of the unique cultural heritage of this historic kingdom of Oriel and the strong tradition of music making in the area, and we recognise the importance of preserving and promoting the music of our eminent local musicians. We are delighted that many members of the Gardiner family were present for this special concert as we pay tribute to and celebrate the music of these two fiddle players.

The Spring Semester concert, which coincided with Seachtain na Gaeilge, celebrated the music of another local musician and composer, Josephine Keegan. A fiddler player and TG4 Composer of the Year in 2005, Josephine is well known for her performances with Seán Maguire and Joe Burke. One of the most prominent female musicians of her generation, she continues to perform and compose and is an inspiration for many of the musicians of the region.

Plans are underway for an exciting new recording that will make accessible some of the wonderful music of the Oriel region and we look forward to more performance opportunities through which to celebrate the unique cultural heritage of our region. 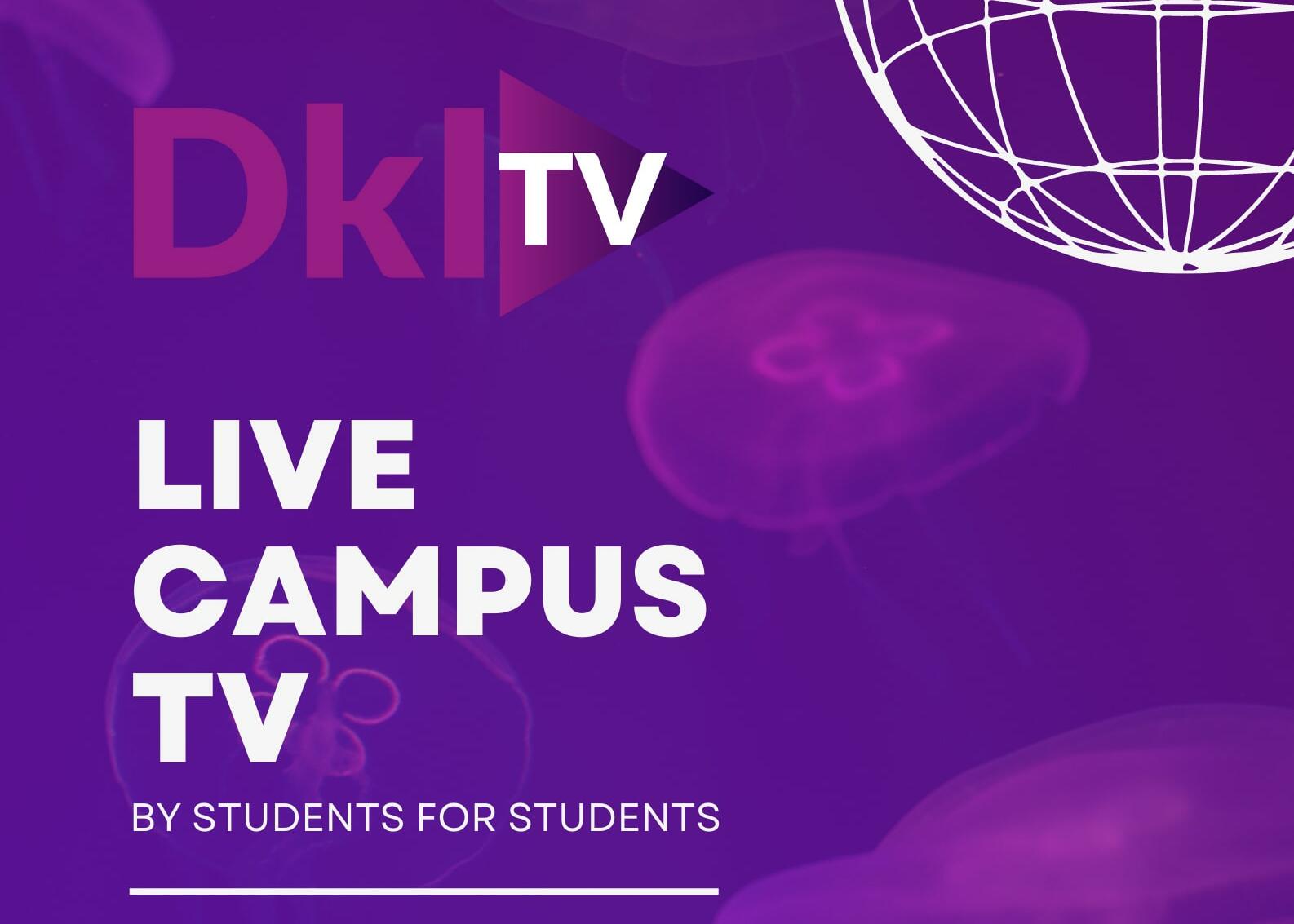 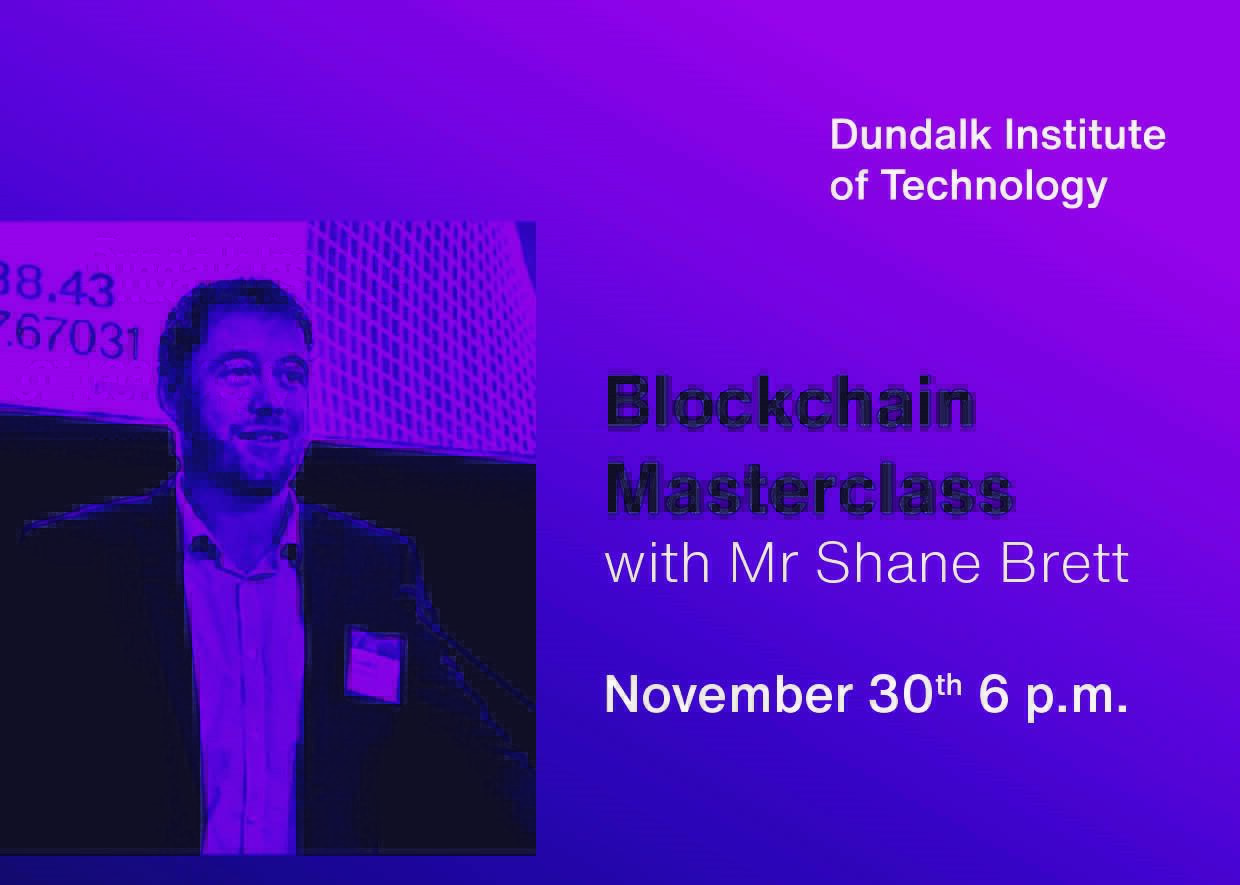 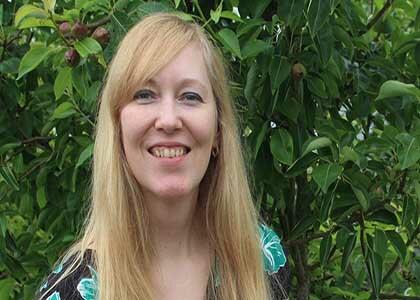 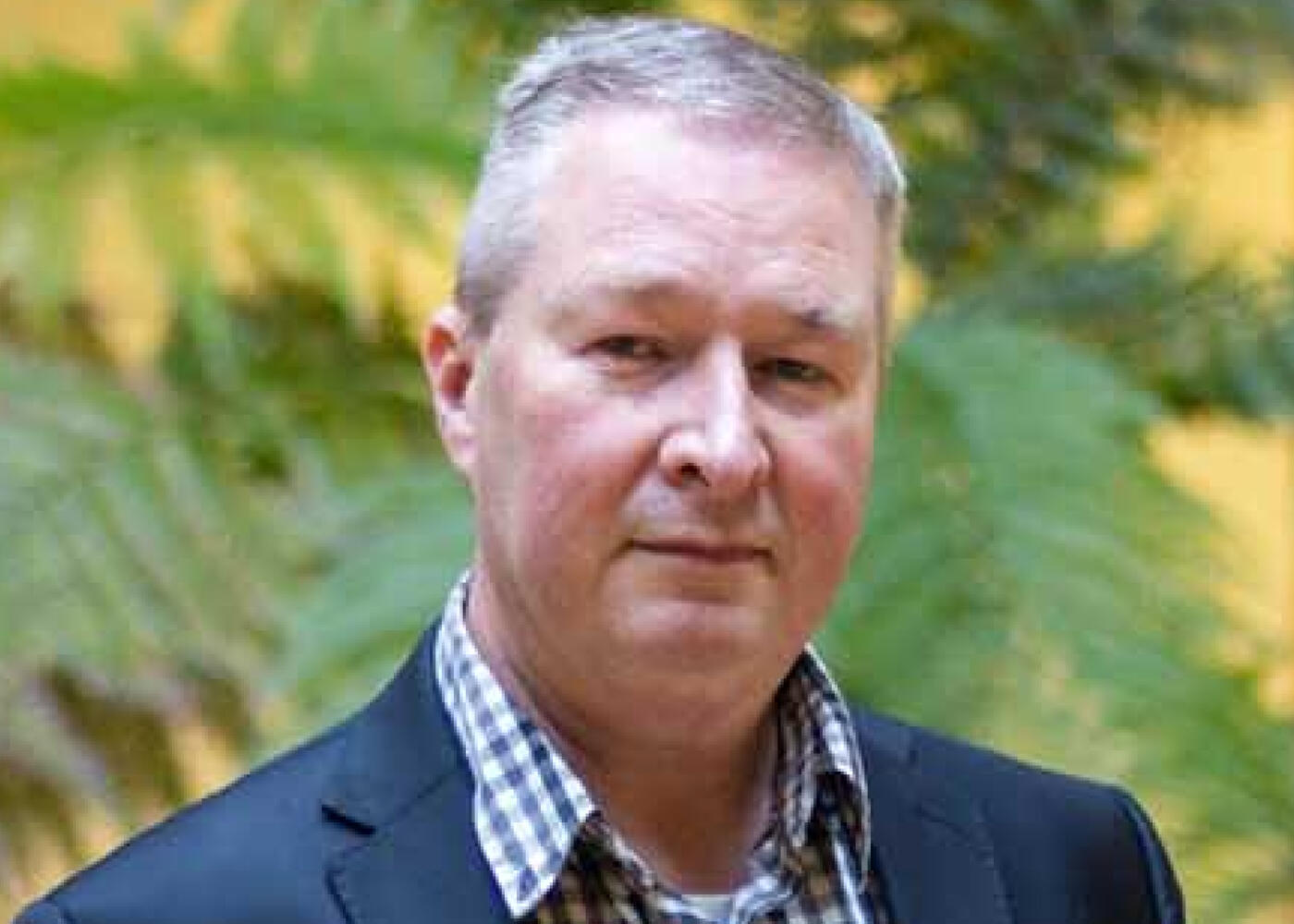 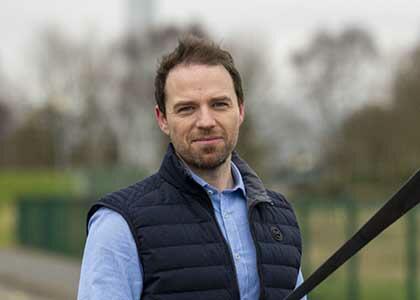