The DkIT Men’s football team (1st XI) have progressed to the final of both the CFAI CUP and the Division 1 league. The team, managed by DkIT graduate Thomas McShane, qualified for the Cup Final after beating NCI in the semi final in Oriel Park. The Division 1 league semi-final against MTU Cork took place in Carlow. This victory also earned promotion to the Premier Division of Colleges Football. 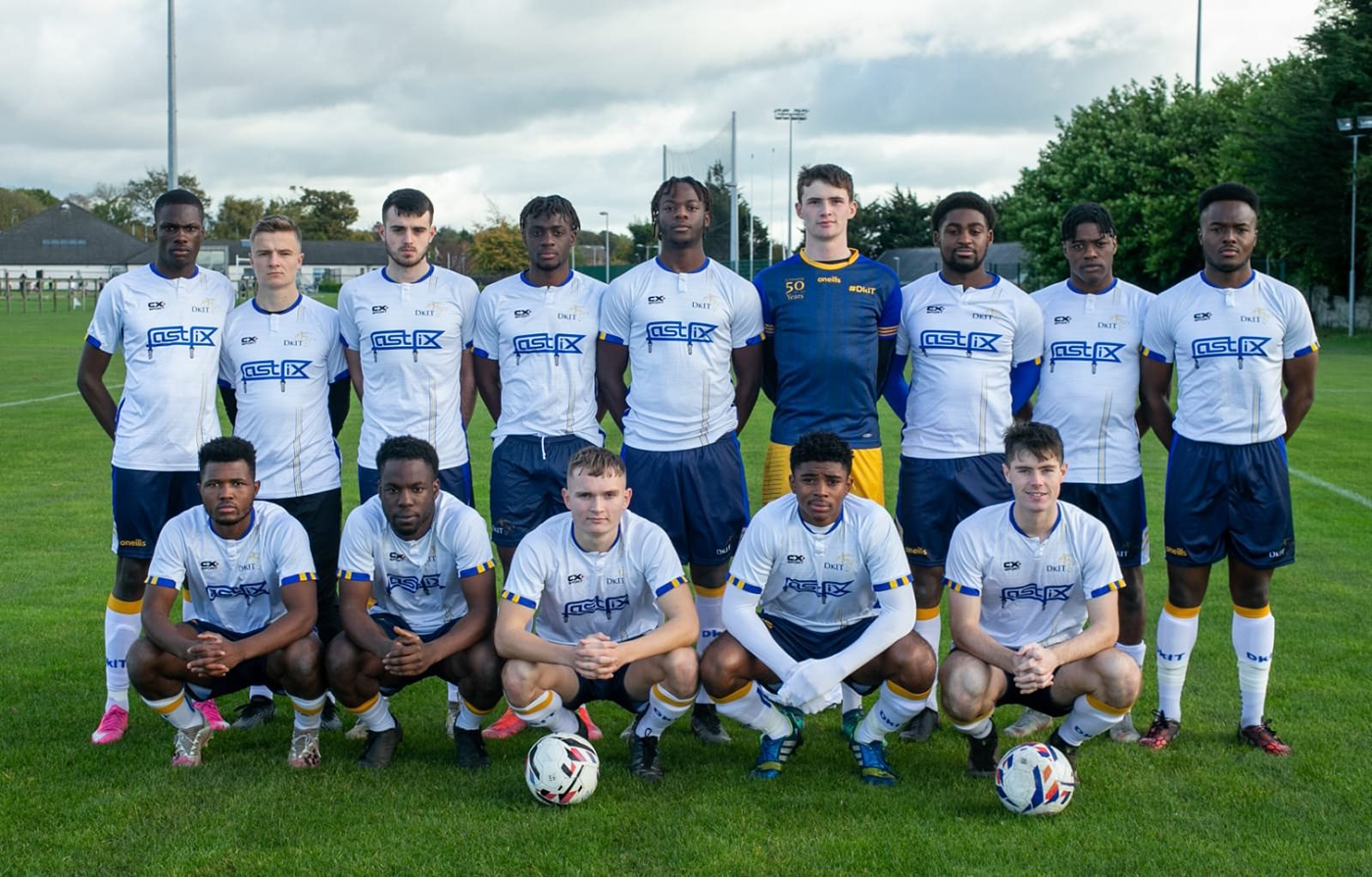 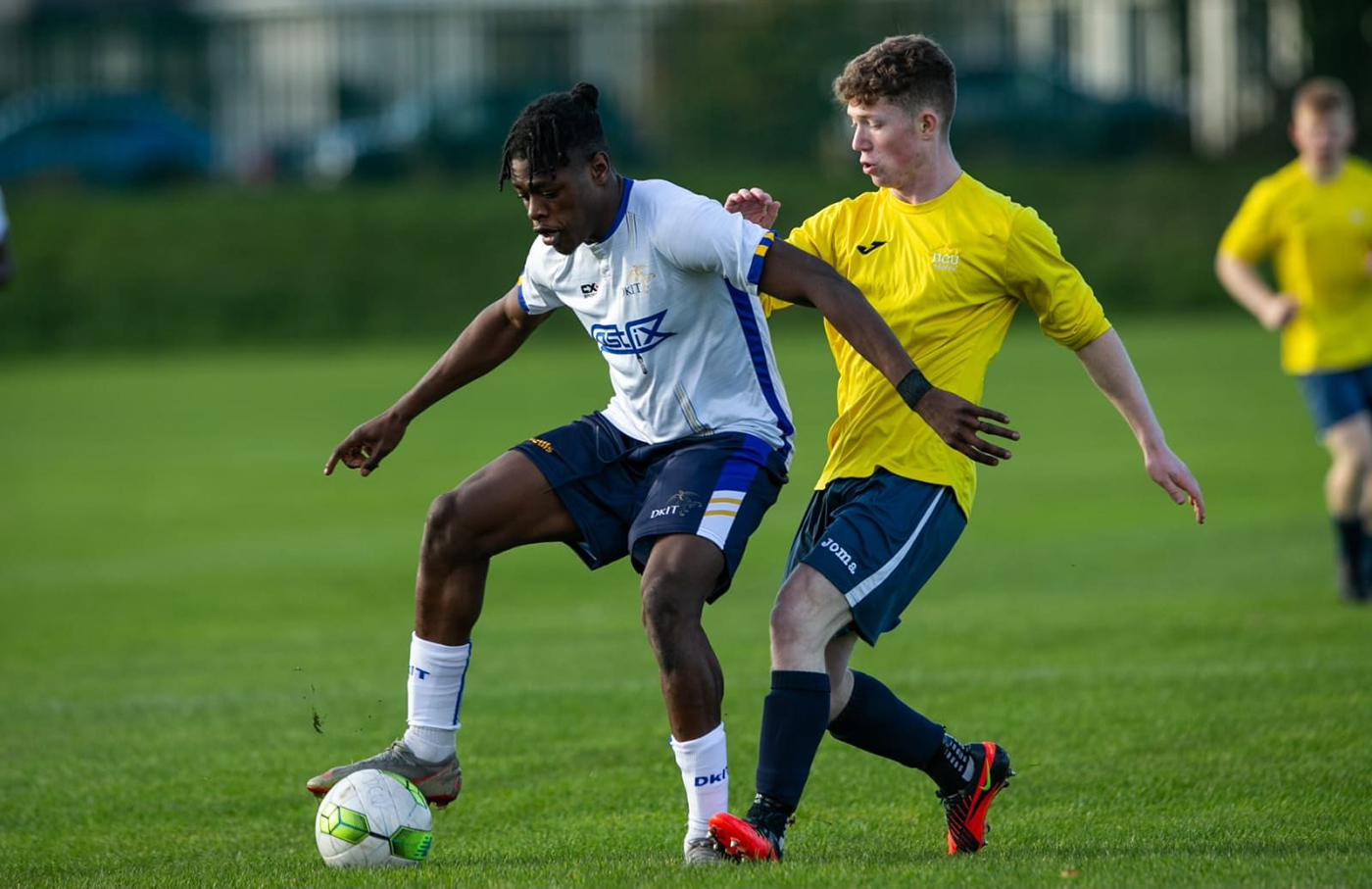 DkIT went into the last game level on points with DCU and Queen’s University and a 1-0 win against QUB in their last game of the group stages brought them to the semi-finals of the Division 1 league. The semi-final of the Division 1 league was on the 9th of February, and they were playing MTU Cork in Carlow. DkIT started the game well and took an early lead thanks to a top corner finish from Patrick Abako. Five minutes later MTU Cork equalised with a brilliant volley from 20 yards out. The first half ended 1-1 with both teams trying to break down opposition defenses. In the second half, DkIT started to get tired resulting in sloppy tackles leading to a red card late in the second half. The second half ended 1-1 and the team had to see it out to extra time with ten men.

In the first half of extra time DkIT dominated possession and they changed the game's pace. The second half of extra time proved more exciting when Michael Soyemi took it around the keeper and tapped it in bottom corner to give DkIT a 2-1 lead with 10 minutes to go. MTU Cork were hungry to get an equalizer with a late free kick bringing all 10 players to the box. The ball was put into the box and DkIT keeper, Niall Brady, punched it out to Dipo Dele who latched onto it, with no opposition in front of him, he was clean on goal and he put it past the keeper to kill the game. The game ended 3-1. This will bring DkIT football team to its first final since 2016 and promotion to the Premier Division.  Current Dundalk FC manager Stephen O Donnell was DkIT coach on that occasion in 2016.

On the 22nd of February DkIT played their second semi-final in Oriel Park against NCI. DkIT started off the game strong as they were 3-0 up by the 25th minute. They conceded a goal late in the first half and the first half ended 3-1. DkIT came out strong in the second half and went on to score five more goals. They were looking unstoppable and playing brilliant football. NCI managed to score another goal in the second half and the game ended 8-2. The goal scorers were Kizito Ekwueme (2), Seb Beslic (2), Eddie Otesanya (1), Fintan Brady (1), Ben Mullen (1), Tiarnan Murphy (1). Confidence is sky high going into the final

DkIT play their first final in the Division 1 league on March 1st in Belfast and the CFAI Cup Final the following week with the date and venue yet to be confirmed.