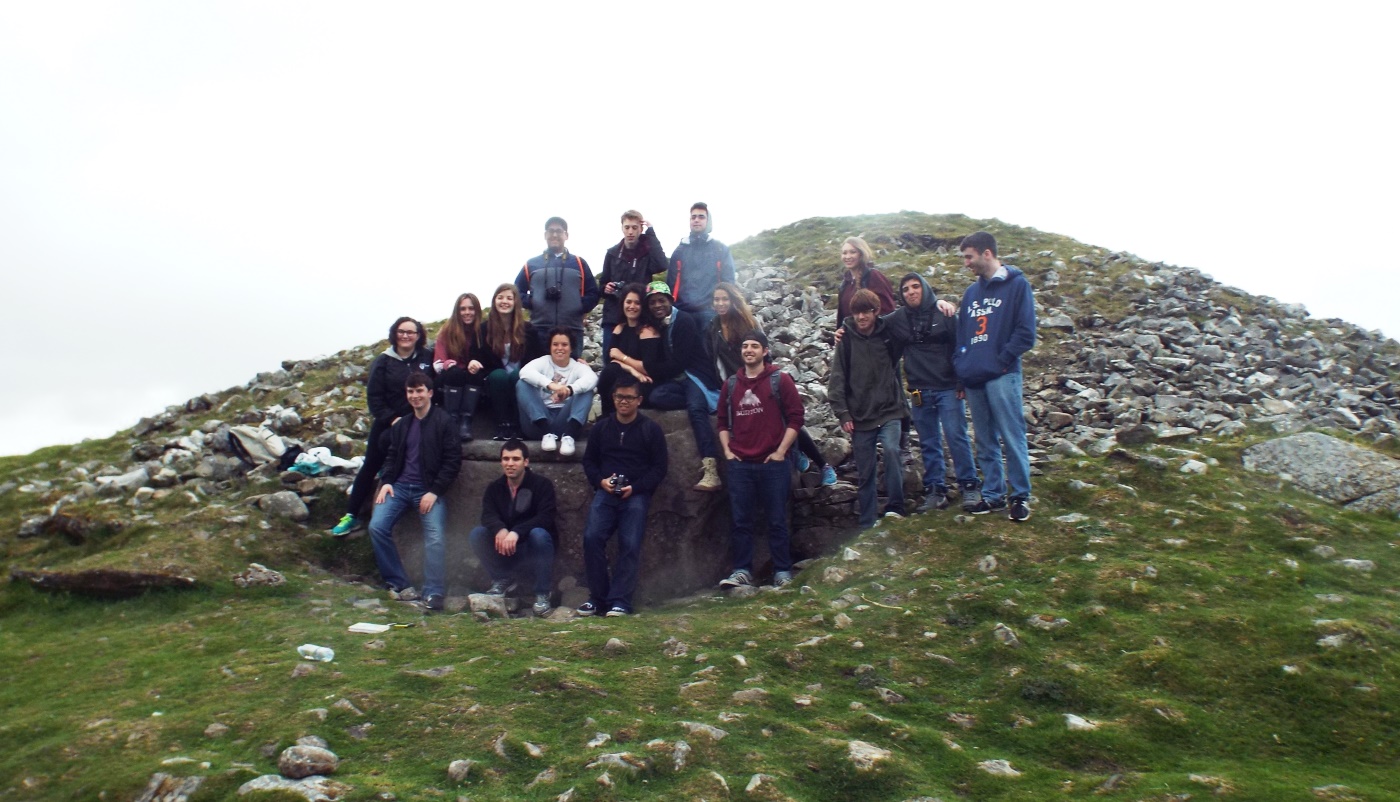 This intensive course introduces participants to the rich archaeological and historical heritage of Ireland through the sites, monuments and history of the Boyne Valley, Co. Meath, Ireland.

This course introduces participants to the rich archaeological and historical heritage of Ireland through the sites, monuments and history of the Boyne Valley, Co. Meath, Ireland. The Boyne Valley has long been known as a deeply significant area with a very long heritage and history. The cultural landscape of the Boyne Valley charts the development of Ireland over millennia from earliest times to the present day. Fáilte Ireland has recently underlined the importance of the area with its inclusion as a key region in the Ireland’s Ancient East initiative.

Participants are introduced to the various phases of development of Ireland’s past on the DkIT campus in a seminar style setting led by experts in their respective fields. Each of these sessions are followed by a themed field trip where participants visit the equivalent sites in the Boyne Valley to experience them first-hand. The first field trips visit prehistoric sites in the region: Newgrange and the Brú na Bóinne World Heritage site, the Loughcrew Megalithic Cemetery and the Hill of Tara.

Medieval sites will include the monastic complexes at Monasterboice and Kells, the high medieval abbeys of Mellifont and Bective, the castle at Trim and the streetscape of the medieval town. Visits to the Battle of the Boyne site at Oldbridge, Beaulieu House, Slane Castle and the Ledwidge Museum complete the programme.

Unit 1: Introduction to the prehistory of Ireland and the Boyne Valley

This unit will deal with the idea of prehistory, the earliest settlement of Ireland, the coming of farming and the megalithic tradition, technological, social development and increasing long-distance contact through the Bronze Age and the Iron Ages leading to an examination of the concept of the Celts and their impact on Ireland.

Unit 1 Field Trip: The prehistory of the Boyne Valley

This Field Trip will include site visits to a series of appropriate sites in the Boyne Valley which might include: The Brú na Bóinne World Heritage Site – Newgrange, Knowth and Dowth; The Hill of Tara; the Loughcrew passage tomb cemetery; Fourknocks passage tomb.

Unit 2: Ireland and the Boyne Valley in the early medieval period

This unit will explore the coming of the historic period and following a brief survey of the Roman background to this development the importance of the introduction of Christianity and the unique development of insular monasticism to a large extent independent of Rome. Particular features of insular monastic sites including churches, round towers and high crosses and enclosures will be introduced and contextualized. The parallel development of the secular landscape will also be examined and will draw on the information in the 7th and 8th century AD law texts as well as recently uncovered archaeological data.

The Field Trip will include visits to a series of sites in the Boyne Valley which might include: Monasterboice monastic site and high crosses; Kells monastic site – round tower, high crosses and early church; Donaghmore round tower with Romanesque doorway; The Hill of Slane; Danestown bivallate ringfort, a high-status residential centre.

Unit 3 Ireland and the Boyne Valley  -  the medieval period

The coming of the Anglo Normans to Ireland in 1169 signalled a series of profound developments both political and physical – the traces of which can still be clearly seen in the Irish landscape. Ireland and the Lordship of Meath became Henry II’s ‘breadbasket’ – a major centre for agricultural production with a corresponding economy. The lasting legacy of this time is the series of great earth and stone fortifications, churches and cathedrals and, perhaps most important of all, a network of market towns and port towns to drive this new economy.

The Field Trip will include a series of site visits to appropriate sites which might include: Dun Dealgan Motte; Roche Castle; Trim Castle; Mellifont Cistercian Abbey; Bective Abbey; Millmount and Drogheda town walls; the medieval town of Trim

In this unit students will receive an introduction to the Plantation of Ireland from the early sixteenth century to the Battle of the Boyne which involved the transfer of the land of Ireland to new Protestant landowners. Following this cataclysmic change there was a gradual transition from castle to fortified house to ‘big house’ or mansion in the eighteenth century which will be explored. The prosperity of the Georgian period and corresponding economic and other development will also be discussed. The move towards independence through the nineteenth and early twentieth centuries will be outlined. This period saw the emergence of the religious-ethnic identities of Catholic-Nationalist and Protestant-Unionist. The struggle between these identities led to the partition and establishment of an independent Irish State and Northern Ireland. The development of the site of the Battle of the Boyne at Oldbridge, regarded as ‘holy ground’ by the Orange Unionist tradition in Northern Ireland, took place in the context of recent initiatives aimed at reconciling the two communities.

Unit 4 Field Trip: The Boyne Valley in the modern period.

The Field Trip will include site visits to a series of appropriate sites which might include: The Battle of the Boyne battlefield and centre, Oldbridge; Beaulieu House; Boyne Navigation; Slane Mill; Slane Village; Slane Castle; Ledwidge Museum.

This course is normally delivered at the end of May/start of June (over a 2-week period) and includes a mixture of in-class lessons and supervised fields trips.

There are no particular academic entry requirements for this programme.

Notice
A reasonable level of mobility is required to access a number of these sites. Those with limited mobility may not be able to access every site.

The programme will be of interest to overseas students pursuing a ‘study abroad’ option and who have an interest in studying in Ireland. Those who successfully complete the programme will be awarded 10 ECTS (equivalent to 6 US credits but this should be checked with your home institution before booking).

All seminars, lectures and tours will be conducted through English so fluency in English is a requirement.

Participants should be aware that the field trips involve visits to archaeological sites and monuments. A reasonable level of mobility is required to access a number of these sites. Those with limited mobility may not be able to access every site.

If you are interested in this course, please contact Dr. Conor Brady, Department of Humanities, School of Business & Humanities, DkIT.