Patrick Scott was born 1921 in Kilbrittain, County Cork. First training as an architect and working for the Irish architect Michael Scott. For fifteen years he assisted in the design of Busáras, the central bus station in Dublin and he is also responsible for the orange livery of Irish intercity trains. Patrick Scott held his first exhibition in 1944. He is known for his gold paintings, abstracts incorporating geometrical forms in gold leaf against a tempura background.

On July 11, 2007, Scott, who is a founding member of Aosdána, was conferred with the title of Saoi, the highest honour that can be bestowed upon an Irish artist. Uachtarán na hÉireann (Irish President) Mary McAleese made the presentation, placing a gold torc, the symbol of the office of Saoi, around his neck. No more than seven living members may hold this honour at any one time. 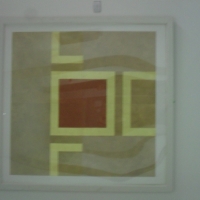