Italian /Spanish artist, born in 1960 in Rome, pursued early studies in Rome and in Gran Canaria. She moved to Dublin in 1985 where she had three children. Exploring the field of body awareness, dance, yoga and movement as well as Buddhist meditation, for thirty years, teaching in diverse contexts such as prisons, addiction clinics, teacher training courses and courses for people with chronic illness.

Practising as a self taught visual artist for the last fifteen years. Catizone worked with eleven female artists in Bridge St Studios in Dundalk from 2001 to 2005 and held many group exhibitions there. Her solo exhibitions include: Ardgillan Castle in 2004, “Mudra” Italian Cultural Institute in 2007, Juice cafe, (As a funding event for Care Local) in 2008, The Shed and Bewleys cafe, Dublin, showing projected drawings for a performance on Dante's Divine Comedy. This show is also being shown currently in Italy in Universities and Theatres. Her solo exhibition was held at the Basement Gallery in Dundalk in 2008. Her film was selected at the Gay Pride film festival in 2009.

Recently she exhibited her work at “Made on Monday", (November 20010) an exhibition at the Complex, in Smithfield, Dublin, showing the work of more than thirty Dublin contemporary artists. Her work has been purchased by Dundalk Institute of Technology, commissioned by Lough Derg religious Centre and by many private collectors.

Catizone's paintings are on permanent display at Dundalk train station and the DkIT library. She returned to education as a mature student in 2008 and now attending third year course in painting in NCAD. Currently exploring links between painting and performance art and approaching painting as a performative act in a series of events in a new Dublin venue. Considering both performance and installation art and painting as practices of awakening.
Paola Catizone
www.paolacatizone.com 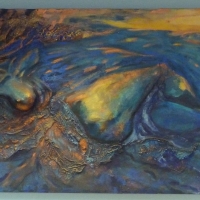 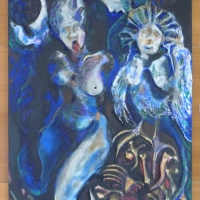