Eilis O' Connell was born in Derry, N. Ireland in 1953. She studied at the Crawford School of Art, Cork. (1970 – 74) Massachusetts College of Art, Boston (1974-1975) Crawford School of Art (1975-77) where she received the only award for Distinction in Sculpture that year. Other awards followed; the G.P.A. Award for Emerging artists 1981, a fellowship at The British School at Rome 1983-1984 and a P.S.I. Fellowship for New York from the Irish Arts Council. While in New York she won a two-year residency at Delfina Studios in London and was based there until 2001.

From her London base she exhibited widely and won many public art commissions. She received the Art and Work for her sculptures at 99 Bishopsgate from the Wapping Arts Trust. In 1998 she won a Royal Society of Arts Award. She has represented Ireland at the Paris Biennale in 1982 and the Sao Paolo Biennale in 1985. The majority of her commissions are in the U.K. the most significant being Secret Station made in 1992 using bronze, fibre optic light, and steam for the Cardiff Bay Arts Trust at the Gateway, Cardiff; Vowel of Earth Dreaming its Root, a 12 meter high Kilkenny limestone sculpture for the London Docklands Development Corporation at Marsh Wall, The Isle of Dogs; Pero footbridge a rolling bascule bridge 54 meters long designed in collaboration with Ove Arup Engineers, London in 1999.

She has completed 2 sculpture commissions for Lismore Castle in Co. Waterford.In 2002 her large bronze Unfurl was lent by the Cass Foundation to the Venice Biennale and her smaller sculptures were shown simultaneously at the Guggenheim Museum. Since moving back to Ireland she continues to do commissioned work abroad and has begun doing commissions here, the most notable being Reedpod a 13.5 meter sculpture in hand beaten copper and stainless steel for Lapps Quay in Cork commissioned by Howard Holdings She has set up a large studio in a renovated creamery in the hills north west of Cork city.She is a founder director of the national sculpture factory in Cork, a former member of the Arts Council of Ireland, a member of Aosdana, and a member of the R.H.A. She recently completed a series of eight large sculptures for a solo show in the Chalkpit at the Cass Foundation in Sussex.

In 2011 she presented a major exhibition of her work at the RHA in Dublin. Her sculpture ‘Appetites of Gravity’ in DkIT consists of 2 similar elements, tilted cones, one inverted, one upright. One defies gravity, the other accepts it. The cones were cast in bronze have an engineered stainless steel core that allows them to balance each other. In human terms, being able to cope with gravity is about being alive but at some point we all succumb to the appetites of gravity. The title is from a Seamus Heaney poem, The Tollund Man, which was written about the Bog People found in Denmark in the 70's. (The remains of people found preserved by the acid levels in the bogs.) 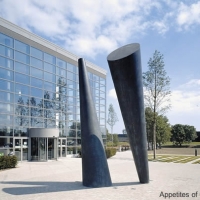